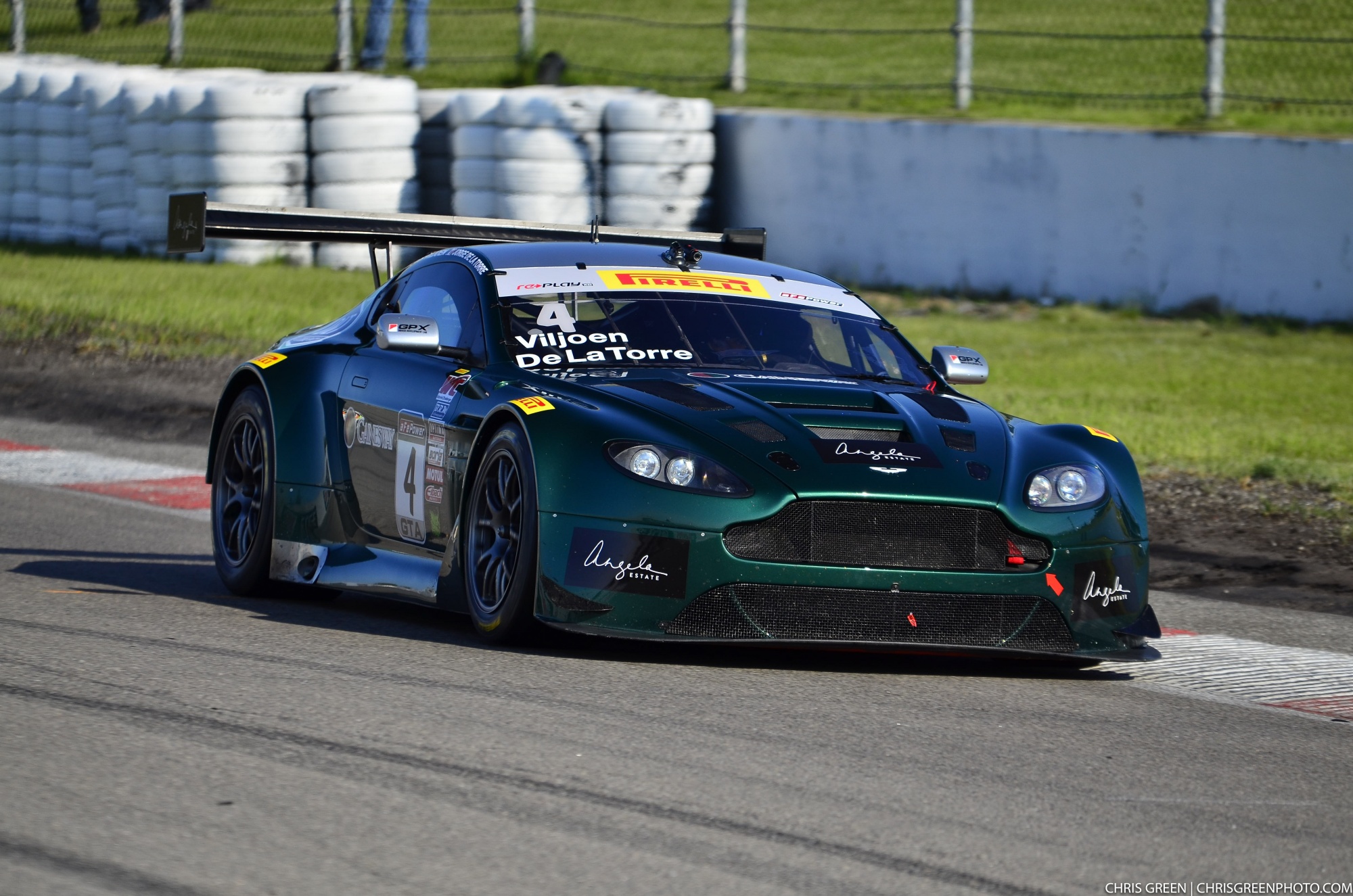 It has been a long wait from the Daytona 24 hours but finally I was in a racecar again, this time competing in the Pirelli World Challenge new Sprint X championship with DLT Racing in their Aston Martin Vantage GT3.

It was a weekend of new experiences, it was my first time in Canada and the first time racing at the famous and picturesque circuit that is Canadian Tire Motorsport Park (formally known as Mosport) and it was the first ever endurance event to be held by the Pirelli World Challenge organization.  The one thing that was familiar was the beautiful Aston martin Vantage GT3 car with which I drove at Daytona; there is nothing that beats the sound of the 6 litre V12 engines.

The Sprint X format consist of two 60 minute races over the weekend with a mandatory driver change in the middle.  It is more like a sprint endurance race. I teamed up with Jorge De la Torre who owns DLT Racing. We are both classified as Bronze rated drivers making us the only team to have such a pairing. This was a benefit as it gave us the choice to us either driver to qualify the car for the first race as a Bronze driver can only qualify the car.

In qualifying we made the decision for me to qualify and this led to pole position. It was a great feeling and a great reward for the team as it was their first ever pole position and it was great exposure for both the team and I.  It was nice also to get the first ever Sprint X pole position.

Race 1 was late on Saturday morning and the weather conditions were perfect. I got a good launch from the rolling start and managed to pull away from the chasing pack over a second a lap. I was in a great rhythm and was loving driving the old school and extremely fast circuit, with so many elevation changes it felt like riding a rollercoaster. With just under half way of the race completed I had a warning on my dash telling me I had an issue and seconds later I was stuck in 5th gear, I tried to restart the system but the problem persisted. I dived into the pits to see if the team could solve the problem but unfortunately it was something we could not fix quickly and we retired from the race. It was disappointing as we had built up a 25 second lead and this would have given my team mate Jorge the chance to lead his stint and maybe end up on the podium. It was not meant to be and it was a small rubber seal that failed on the gear pump! Not the start we wanted but these things happen and we knew we were the fastest cars for race 2.

Race 2 grid position was determined by the fastest lap of the second drivers race lap from race 1, unfortunately due to the mechanical failure we had in race 1 Jorge was unable to set a lap time and this demoted us to the back of the grid for race 2. After starting last Jorge made his way up a few spots in his stint and drove a smooth and consistent drive, minimizing the gap to the leaders which consisted of very experienced pro drivers. With 25 minutes of the race completed Jorge brought the car into the pits for the driver change. After a smooth driver change I headed out for the last 35 minutes to try and gain as much time as I could to the leading cars. I came out of the pits in 5th position, within 15 minutes in the car I had raced up to 3rd position, which was the aim for the team and myself. I was catching the 2nd placed Porsche quickly and with 5 minutes left and the Porsche in my sights I had a low fuel alarm on the dash, this meant I had to try and save fuel by driving slower and sacrificing 2nd place. Unfortunately on the last lap of the race the car stopped and I was unable to complete the last lap and hence losing 3rd place.  We ended up finishing 5th but it was a bitter pill to take as in both races we lost some great results and the chance to stand on the podium. The positives to take from the weekend were that we had the fastest car all weekend and we had great exposure in the press and on TV and I had the chance to showcase my speed as a driver. As a team we will learn from the mistakes and look forward to racing again at Utah Motorsport Complex in August for round 2 of the Sprint X championship, a podium finish will for sure be the aim.