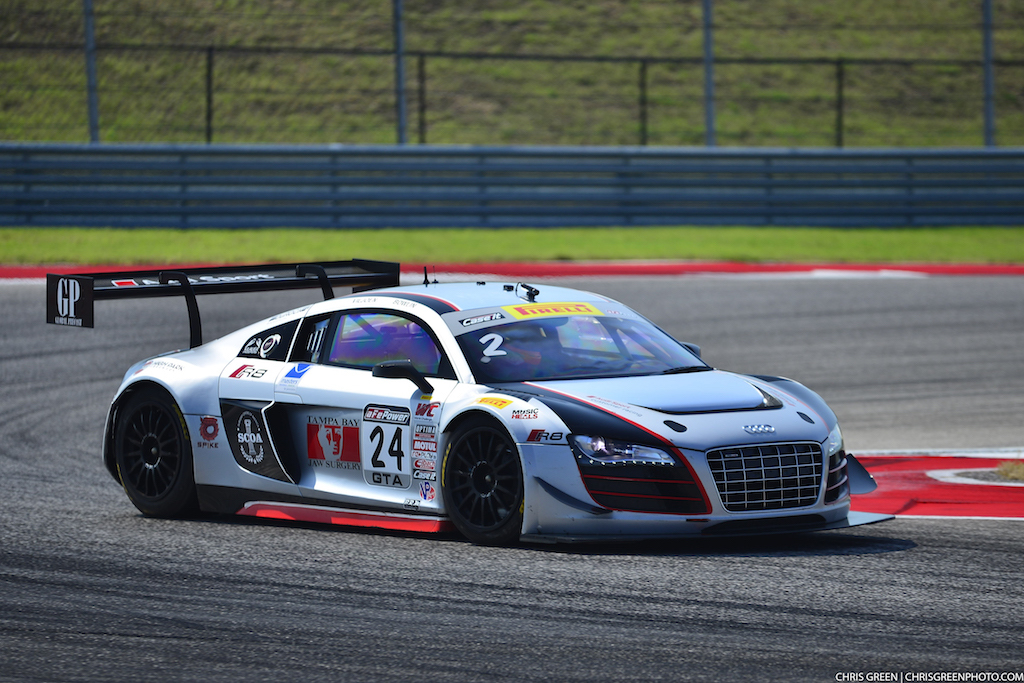 It was a picture perfect weekend at the famed Circuit of the Americas in Austin, Texas as veteran racer Lars Viljoen returned to the driver’s seat. Competing with the Audi Sport customer racing outfit of M1 GT Racing and teamed with co-driver Walt Bowlin, the duo was able to score a podium result in race two while showing solid race pace throughout the weekend.

“After not racing for a nearly a year it was a dream come true to get back behind the wheel of a great GT car at an awesome track like COTA. We had high hopes to win the AM class but a few issues hampered us preventing us to achieve our targets. All in all, a solid weekend and we learnt a lot as a team,” explained Viljoen.

After progressing through Thursday’s Promoter Test Session, Viljoen and Bowlin would run into a little issue on Friday that would hamper the handling of their Audi R8 machine. After heavily hitting a curb in one of the practice sessions and damaging the Audi’s damper, the issue was unable to be resolved trackside as the driving duo would need to complete the weekend with the issue. With an ill handling machine as a result of the incident, Viljoen and Bowlin would do their best to salvage good weekend results, despite a damaged racecar.

“I qualified the car for race one and we ended up only a tenth off getting the AM pole position. A better lap time was expected but the balance of the car was not right so salvaging a second in class was not bad,” explained the Audi driver. “I started race one and had a great start making up five positions on the first lap to lead our class. Due to a rule I was not aware of I crossed the blend line that is pit exit and I received a drive through penalty which ruined our race. I was very sorry for the team and my team mate as we had a great chance to win our class. I handed over driving duties to Walt who had a great stint and he made up for my error garnering a fourth place result at the end of the hour long race.”

On Sunday, Walt would start race two and maintain the second position in class before Lars took the wheel near the half race distance. With an excellent driver change and a gap to the leader, Viljoen pushed hard to try and catch the leading Ferrari

Lars added, “Walt had another great stint during the start of race two staying out of trouble and avoiding a big first lap crash. Taking evasive action, he managed to escape contact with cars going off right in front of him and handed over driving duties to me for the second half of the race. We maintained P2 in class and were chasing down the leader but ran out of time. After Friday’s practice incident, we were excited with the second place result after battling a wounded race car.”

At the end of the weekend, Lars expressed his gratitude towards the M1 Gt Racing program. “It has been an absolute pleasure to race with M1 GT Racing and Walt Bowlin as my team mate. I have had the best time working with the whole team and in the end, we learned so much throughout the weekend which will help us for future races. I am very excited for what the future has in store.”

Next on the docket for Lars Viljoen and M1 GT Racing will be the 8 Hours of California at Mazda Raceway Laguna Seca over the October 13 – 15 weekend.