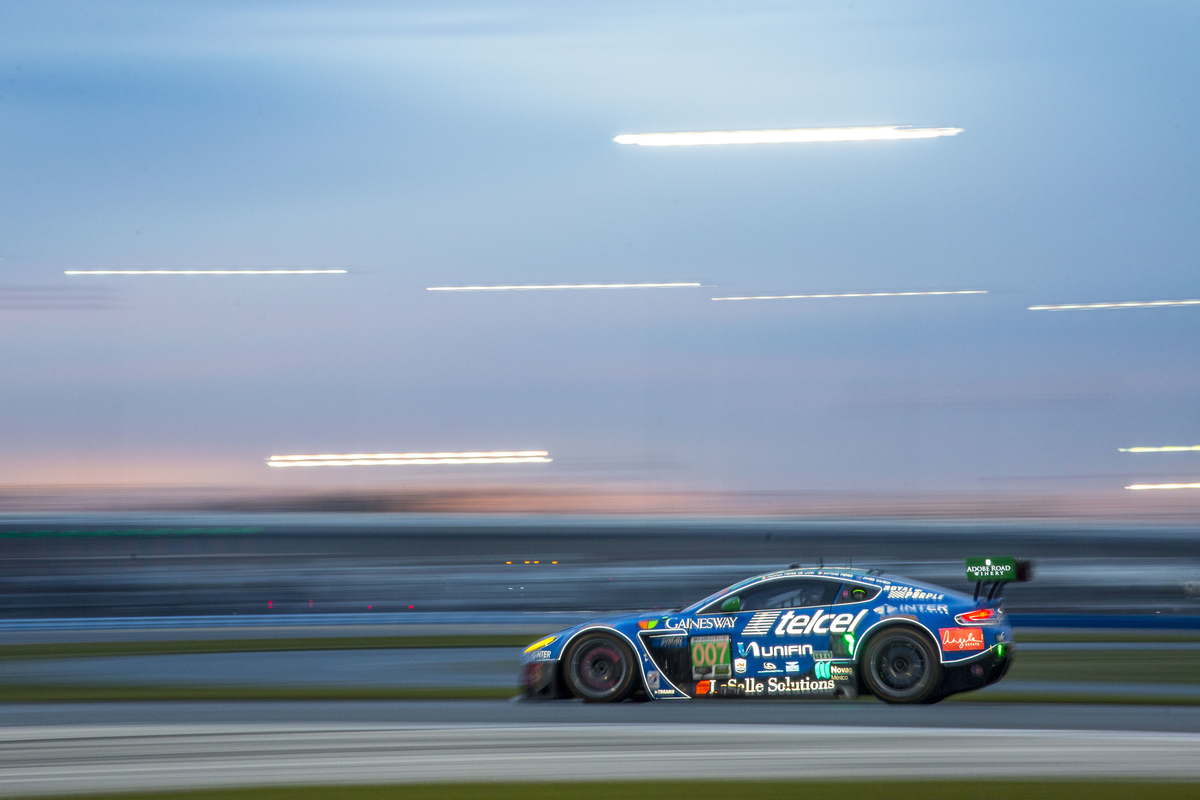 I finally had the opportunity to compete in the Daytona 24 hours! North Americas biggest sports car event and the second biggest in the world behind non other than the 24 hours of Le Mans.

I was lucky enough to have 2 great sponsors in the form of Angela Estate (Winery based in Oregon) and Gainesway (Horse breeding farm located in Lexington Kentucky) support me for this amazing event.

I teamed up with the highly successful and Daytona 24 hour specialized team; TRG-Aston Martin Racing lead by the legend driver and team owner Kevin Buckler. The team has won this race 4 times in the past and has been racing at the event for 21 years; I could not of been in better hands. My team mates were 3 Mexican driver; Santiago Creel, Antonio Perez and Ricardo Perez de Lara, between them have many years experience of racing in Mexico and America. The team added a 5th driver in the form of James Davison who had raced with the team in the previous 2 Daytona 24 hours, so he was bringing experience and speed as for myself and the other 3 drivers this would mark our first start at this famous race.

This is the biggest race I have competed in and the caliber of the other drivers showed this was one of the biggest motor races in the world, it is an event every racing driver wants to win.

The practice sessions before the race were wet and we did not get much running as we wanted to do the minimal amount of laps to not risk damaging the car before the race. In one of the practice sessions I had a massive blow out on my right rear tire while on the famous Daytona banking, luckily I managed to save the car from spearing into the wall and sustaining more damage. We had slight bodywork damage but nothing the TRG-AMR mechanics couldn’t fix before the qualifying session.

James Davison our pro driver qualified the car in the wet qualifying session, he managed a respectable 12th position in class, it was not the conditions that suited the Aston Martin Vantage GT3, but at least we qualified knowing we had a good car for the race.

Come race day it was just an incredible atmosphere to be part of, I had watched this so many times on TV but nothing is better than being present. It was a great experience to be part of the autograph session and meeting so many enthusiastic fans. The driver introductions on the main stage was amazing and to stand in front of so many fans and in the shadow of the new Daytona Speedway grandstands was awe-inspiring. I have to say the Americans know how to put on a great show!

As I was about to start the biggest race of my life I was not nervous, if anything I was excited but also emotional as it has been a long time coming and a lot of hard work to get to this point. I was just trying to soak up as much of the atmosphere as I could.

Out of the 5 drivers I would be 4th in the car, after James, Santiago and Antonio. We were running easily in the top 10 for most of the first 10 hours of the race. We even lead the race at one point. My first stint was really uneventful as I took the car over from Antonio in 8th place in class. I was in the car for an hour and I was driving into the sunset, which was a great experience. It was a great completing my first stint of this famous race and I learnt a lot in regards to dealing with the faster traffic. I handed the car over to my teammate in 7th position. A successful first stint completed.

It was a team decision to start double stinting each driver into the night, this would allow each driver more time to sleep or rest between stints which is important for such along race.

We were running fast laps throughout each stint during the night and stayed out of trouble. It is important to stay on the lead lap but it is easy to loose a lap here due to penalties or small mistakes. We dropped a few laps during the race but always managed to get them back under caution periods due to the wave around system they have in the US. This gives every team a chance to get back in contention even after mistakes or penalties.

At around midnight I jumped into the car for my second stint, the track was dark but well lit from the massive floodlights Daytona has around the whole track. After a good pit stop under caution I came out in 8th place amongst some of the best drivers in sports car racing. The top 14 in class were all nose to tail, I held my own and worked my way up to 5th position at the end of my stint. At one point I was 2nd in class fighting wheel to wheel with names like Shane Van Gisbergen and Andy Lally, names I watch week in week out on TV

I proved I had the speed to race at the highest level and throughout my stint I grew in confidence.  I wanted to race hard with the other drivers but I had to keep things in check as to not make a mistake, it is all about reaching the end of the race and I had that in the back of my mind, I had to tame the racer inside of me!

While feeling great after my stint and confident we had a car capable of a great result I went for a sleep to refresh myself for my next stint. The problem is it is hard to sleep when you have adrenalin pumping through you and all you want to do is watch the race and know what is going on.

Unfortunately when I returned to the pits after my rest I found out my teammate had an accident with another car at around 4am in the morning. We sustained too much damage to continue in the race and the team had to retire the car.

It’s a hard pill to swallow and it’s hard to process the disappointment for myself but also for the team. Everyone had put in so much work to make sure we were there racing and competing with a very competitive car. The only goal for me was to finish the race, it seems less ambitious but in the end just to finish a race as hard as Daytona is like a victory. It is easy to underestimate how hard endurance racing is. We win and loose as a team and I could not have raced with a better team, I was extremely proud of everyone at TRG-AMR.

I am still buzzing from the experience and I am even more ambitious to race there again next year. Bring it on.