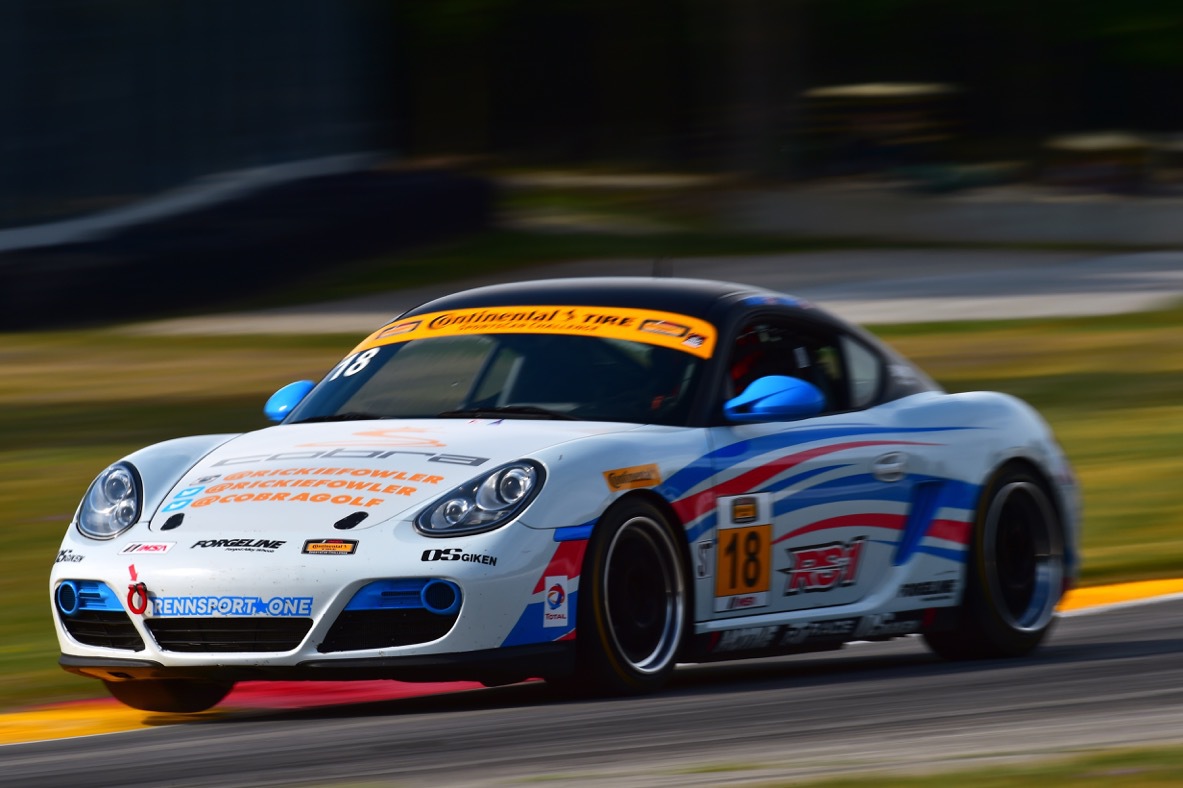 Road America, what a place to make my America racing Debut! I would be racing in the Continental Tire Sports Car Championship in a Porsche Cayman with the Florida based Rennsport-One team and my team mate for the weekend was the young Canadian Remo Ruscitti.

I had seen Footage of the track online and was told by a few people how good the track was but it was not until I got there to see the beautiful setting in which the track was situated in the farmlands of Wisconsin an hour north of Milwaukee. The circuit reminded me of some old British circuits with lots of elevation changes and not a lot of run off.

This race was completely new to me in everyway, I had never raced in America, I had never seen the track or even raced with a roof over my head! The ST (Street Tuner) class I was racing in is a competitive field of cars that are very close to the road going version with only a few performance changes to make them track ready. I have previously been used to purpose built racecars that are extremely sensitive and generate a lot of down force and the Porsche Cayman I was racing could not be more different!

My first laps were in practice on Thursday and I had to say I was a duck out of water for the first couple of laps. It took me a while to get used to the lack of grip and the weight of the car before I felt ready to push it to the limit. The more laps I completed the faster I got and it was a great experience driving these cars to the limit as they move around a lot.

Due to Remo being more experienced than me we decided he would be the closing driver, this meant I would start the race and also qualify the car. Unfortunately the heavens opened an hour before our qualifying session was scheduled to start, the track was too wet and dangerous to go out and this meant qualifying was cancelled. The grid would be determined by championship position and unfortunately we had to start at the back of the grid in 24th position as it was my first race and I had not collected any championship points yet! It was a shame as I was confident of qualifying in the top 5 and that would have been a solid starting position for my first CTSCC race.

The race would turn out to be joy and despair. The rolling start went to plan as I stayed out of trouble, I raced up from 24th to 6th position within 11 laps, which was better than expected, but with the lap being long there was ample opportunity to pass. I have to say I had a blast and due to the nature of the ST class it means you can race close and not worry about the aero wash from the car in front, so you could race in big packs wheel to wheel. The first caution period came out 50 minutes into the race and due to a misunderstanding of the rules I was unaware of the drive around rule, where the ST class have to drive around the safety car and catch up a lap to the back of the safety car train. I did not go early enough and so I lost 4 positions which was gutting and I won't be making that mistake next time.

After the safety car came in I only completed 2 more flying laps before bringing the car into the pits for the driver change. We were making an early stop to make up track position but we needed a caution period to help us save fuel and make it to the end of the race. After a very quick driver change and fuel stop Remo filtered up to 3rd position once everyone else had stopped. With 40 minutes of the race to go we finally got our caution period and we thought this would allow us to make it to the end of the race without another fuel stop. Unfortunately after a great stint by Remo he had to bring the car into the pits with only 3 laps remaining for a splash of fuel, a podium finish on debut taken away! We ended up finishing 18th. Not the result we deserved but a lesson leant for next time.

I was seriously impressed with the championship and the whole race weekend, which was a testament to IMSA.  Thanks to a great team effort from Rennsport-One guys for providing the fastest cars out there. I think I'm going to enjoy racing in America!