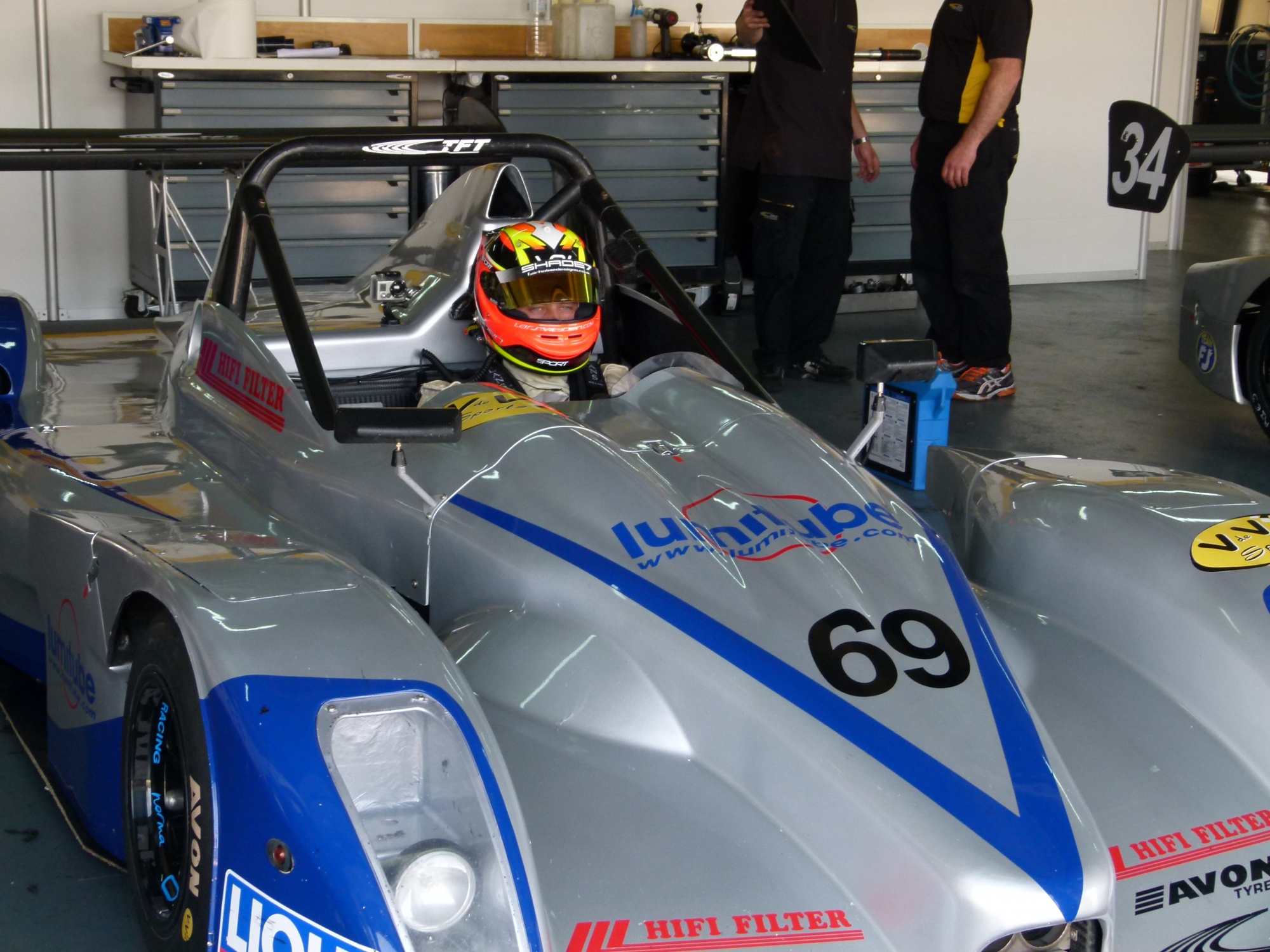 It would be the French V de V championship at a new circuit near Barcelona called Motorland Aragon where Lars would be racing this weekend. It would be a real endurance race as Lars took part in a 6 hour race sharing his car with 2 other drivers, Chrisophe Burrick and Jacques Medard. This time Lars would be competing in a Norma M20 FC a carbon car now considered the car to have as it is a step forward in development and faster than the aluminium chassis Lars has been used to.

Lars joined forces with highly rated French outfit Team TFT, after Lars’ impressive drive at Spa the team gave Lars the chance to join them in the French equivalent of the SPEED Euroseries championship.

Never before has Lars raced for more than an hour this would be a new experience as Lars would have to drive a 2 hour stint followed by another hour in the car at the end of the 6 hour race so it was a real test of endurance for car, team and driver.

After a very positive practice Lars and the team had high hopes for qualifying. With track temperatures rising for qualifying this would have a big effect on the cars and unfortunately Lars and his team did not find the best setup for the car to suit the hotter conditions. With a very competitive field Lars would qualify in 6th position, 2 tenths of a second covered 3rd position to 6th position. A positive result but Lars knew with a few chances to the car he could have qualified higher.

This would be a long race for drivers and cars, the emphasis for an endurance race is to look after the car and drive it to the end with breaking it. So it would be a game of chess rather than an outright sprint.

Lars started the race and as the light went out he made an impressive start moving from 6th to first at the first corner stunning onlookers with his aggressive move. Lars led the first 4 laps but with a lack of experience with endurance races Lars did not know how hard to push and tried to look after the car. With this Lars moved downed to 3rd position. Realising that the more experienced driver were pushing harder, Lars matched their speed and kept with the leading pack for his entire 2 hour stint.

He handed the car over to his team mate Burrick who completed an hour and a half stint, unfortunately he suffered brake problems and this required 15 minutes in the pits to fix the issue dropping the car down to 10th place. Burrick then handed the car over to Medard who completed his one and a half stint without problems and maintained 10th place which was a great result.

With an hour and 10 minutes remaining of the race Lars took over the car with a mission to make up places lost earlier in the race. With the car losing brakes after 5 hours of hard racing Lars managed to make it up to 7th position at the finish and setting very strong lap times ending a great very successful weekend.

Lars says: ‘I have been impressed by the team and huge thanks go out to them for inviting me to race here in Spain. The new carbon car is a huge step forward and a pleasure to drive and I feel again I have shown my speed with 7th position being a strong result considering the time we lost in the pits. To finish the race was a great result in itself and to finish in the top 10 was even better so well done to the team and my team mates. The start was exciting and I could not believe I was in first place by the first corner. It was awesome to lead the race and stay at the front of the race in my first stint. I am hoping to race in with Team TFT again after the summer as I have work commitments with the yacht I skipper in the Med. Next time a podium position is the aim and this result has proved I have the speed to compete at the front.’